And every time there is an election in Albuquerque, I vote yes. I live here, my kids are homeschooled, and we use the heck out of our parks. So very much yes, please. Please do renovate and improve our parks. Thanks.

But something isn’t adding up.

Just down the street from my house is a park that was lovely when we moved here 12 years ago. Ever since then, it has slowly and surely been declining. Little by little, year by year, it gets worse and worse and no one is fixing it. Now, I don’t know that much about how bonds work, but I see other parks getting improved, enhanced, and developed. not this one. I won’t belabor this point, but this is not a wealthy neighborhood. And the parks I see getting improvements are where you might ask? Yup, nicer neighborhoods.

And yet, this one stays crummy. Let me show you what I mean: 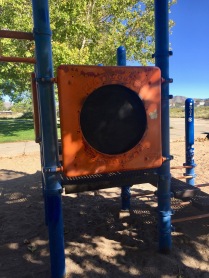 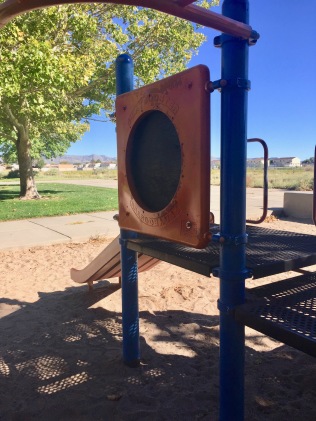 There used to be plastic tunnels to crawl through and a swinging thing for kids to fly from one end of the structure to the other. And that’s just the equipment. Let’s take a look at the trash in the sand, broken glass on the sidewalk where kids might want to skate, syringes in the grass, shopping carts left abandoned: 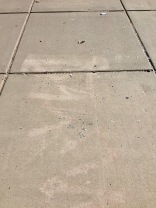 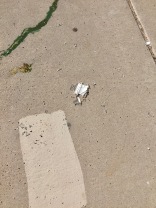 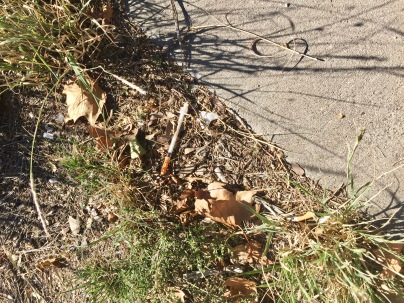 When we first moved here there was a tidy walking path through the park that goes clear through to a Veteran’s Memorial Park just a little ways south. It is still there, but it’s overgrown and quite a few folks have moved in along the path. 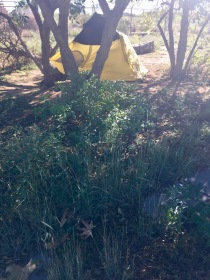 The city of Albuquerque has forgotten Phil Chacon Park. They have forgotten it so completely that on the city’s web page for the park, the suggested park stroll avoids the bulk of the park grounds.

Up till this past weekend, we’d forgotten it too. Early Saturday we were there, along with most of the neighborhood because the wind blew a couple hot air balloons into our neighborhood. What a treat for the neighborhood, folks were crowding in the park to watch as the balloon team brought the balloon down and packed it away.

Note the large tent just past the top of the balloon.

While standing near the balloon, watching the goings on, a kind elderly woman approached us to chat. She told me about how she takes a three-mile walk every morning to check on the neighborhood. She’s not forgotten this park. And we’re not going to forget it again either.

I’m not much of a letter writer or representative caller, but it’s time. We’ll be bugging our city politicians and letting them know that it’s not ok for this park to be forgotten. Not when it’s in the midst of a neighborhood full of children and families and near several schools. It’s time to give this park another turn at being something lovely again.